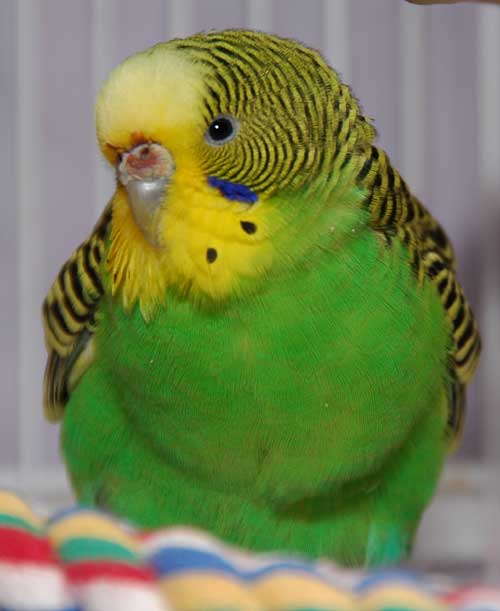 Not Grumpy, but close

Grumpy was a drunk. He was a drunk and he couldn’t fly. Maybe that’s why he was grumpy.

Actually he wasn’t grumpy. Wait, he was Grumpy but that was his name, not his disposition. Grumpy was a happy drunk and not being able to fly didn’t seem to bother him either. He was also a parakeet. My first pet and only bird (so far). He was given to me because he was a creeper (couldn’t fly) and the breeders would rather gift him to a little girl than destroy him. Good decision in this case.

He lived in an almost always open cage in the middle of the kitchen table. There was a knotted rope that stretched down to the floor so he could come and go pretty much as he pleased. Such was Grumpy’s freedom that even at dinner time he was allowed free run of the table. My mother’s husband at the time had an enormous if fickle affection for animals and it was enthusiastically reciprocated. I mention this because if it were left to my mother no way would a bird be allowed to check out what everyone was eating or to patter around in the mashed potatoes (only on my stepdad’s plate).

As I mentioned, Grumpy enjoyed a cocktail when he could get to one. Whenever he heard the cheerful clink of ice cubes in a highball glass he would come running. You could hear the soft thump of him jumping from the table in the kitchen, then the approaching clatter of his claws on the hardwood floors in the hall. Once he entered the living room, where all entertaining occurred, he would make a bee line for the closest drinker. A rapid climb up the pant leg, over the lap, up the torso and down the arm where he would perch on the rim of the glass and proceed to drink until he passed out. It didn’t take long. He would then be conveyed to his cage and gently set on a towel to sleep it off.

There was always some suspense  toward the end of one of Grumpy’s black out drunks. That was, is he going to fall off the glass or fall into the glass? Frequent visitors to our home (I know, it’s hard to believe anyone would come more than once) knew to expect this and when he fell in they knew to grasp him by the tail and lift him out. He would get dried off on the way to the cage and the visitor would get a fresh cocktail.

My grandmother, Nana, just never seemed to catch on to this. Inevitably Grumpy would do a head first dive into her glass and her instantaneous reaction would be to dump the entire contents into her lap to save the bird. This wouldn’t be quite so remarkable if Nana hadn’t been a handsome and dignified woman, always well turned out in grey gaberdine trousers, white starched collared shirt and red blazer. And she took the bus to visit us. I hope she and the bus drivers would share a chuckle whenever she returned home with wet pants.

Grumpy lived a long, if somewhat dissipated life and it wasn’t the drink that did him in. That story will be revealed in future episode of the Pet Chronicles.