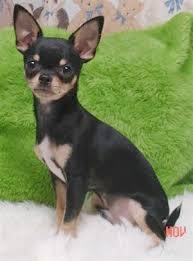 Not Jigsy, but close

Jigsy was  tiny dog with a huge libido. He was an equal opportunity hound. Chihuahua or Great Dane and every female canine in between were likely to receive his adoring attentions.

I have no idea how he came to be a member of our constantly changing pantheon of pets. It probably happened like so many others. My stepdad saw him running loose in the street, stopped the car, opened the door, the creature (a dog this time) ran over, jumped in and come home with him. The man was a charmer.

Jigsy’s tenure with us spanned a period just a little bit too early for me to have clear memories of him. A few of the stories lived on long enough for me to learn them. And now I pass them along to you.

One of Jigsy’s more charming recreations was messing with my pet parakeet, Grumpy. As long as Jigsy lived with us Grumpy had no tail feathers. This complicated the task of fishing the bird out of a highball glass but the Jigs wasn’t concerned about such niceties. At some point shortly after the tail feathers regrew to a decent length the he would start chasing the bird down the hall. Six sets of claws clattering on the hardwood. He pulled only one feather on any given chase. After a couple of days, Grumpy was denuded to Jigsy’s satisfaction and the bird would be free to roam unmolested.

How I know of his libidinous nature is through the story of his demise. The telling of this tragedy was always prefaced with tales of his many attempted conquests. If there was a female dog in heat anywhere within scent distance of home he would escape and head in her direction. We assume his conquests were more attempts than successes as Jigsy had a preference for tall women. To be successful he would have required a platform or an unusually cooperative female.

We lived on a busy boulevard and my mother lived in terror that the dog would get hit by a car while out seeking one of his conquests. Eventually, that’s exactly what happened as he was out pursuing a lovely long-legged Great Dane.

At least he left this world doing what he loved most.